In a time when the ugliness of racism and police brutality dominates the headlines, the January 15 ceremonial dedication of Dr. Martin Luther King Jr. Boulevard in South Phoenix was a beautiful reminder that people of all races support Dr. King’s Dream.

Councilwoman Gallego and Councilman Nowakowski spearheaded the effort for the ceremonial naming of Dr. Martin Luther King Jr. Boulevard and they enlisted the help of city leadership, local school board members, faith and community leaders.

Overall, 32 signs honoring Dr. King will be placed at each major intersection of Broadway Road from 48th Street (east) to 67th Avenue (west).

As I mingled with friends, neighbors and colleagues, I couldn’t help but to get wrapped up in the spirit of love and pride at the unveiling event.

It was great to witness the youth from nearby schools read poems and give speeches about Dr. King’s impact on their lives and the world as a whole. They admired his willingness to fight against the Jim Crow laws that prevented African Americans from enjoying freedoms that we now experience today. The South Mountain High School Step Team thrilled the crowd with their “Ice Cold” moves.

It was great to see politicians of past and present, educators and business leaders mingle with “regular folk.” The vibe was sincerely positive.

Most of all, it was a day for all Phoenicians to be proud as people of ALL races came together to honor one of the most influential civil rights leaders of all time. Dr. King did not just fight for African Americans, he fought for everyone!

However, I encourage people throughout the Valley of the Sun to be mindful of the fact that the work is not done regarding the naming of MLK Blvd.

As mentioned before, the renaming of Dr. Martin Luther King Jr. Boulevard is “ceremonial” in nature.

MLK Blvd committee members still have to get approval business owners and homeowners on Broadway Road on a permanent name change. Who knows how long that process will last? Who are the people in charge of soliciting approvals? Is there a deadline?

Furthermore, when will all cities from Buckeye to Mesa embrace the permanent name change?

I want it to be known that PhxSoul.com supports the Dr. Martin Luther King Jr. Boulevard effort. And I believe that Broadway Road was a solid choice because it is part of the epicenter of Black history in Phoenix and is the home for many Black community events. Furthermore, Broadway Road extends through most of the Valley.

PhxSoul.com will be following up with our City Council representatives to call for more transparency on the process and we will share all updates with you. 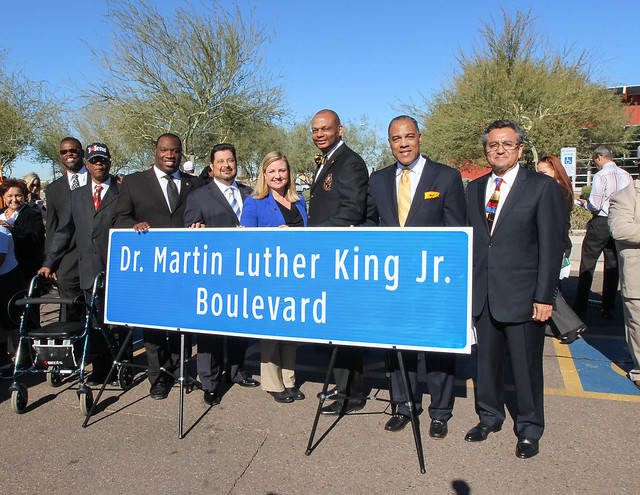 All images provided by DL Smith Photography for PhxSoul.com.

Opinion: Which Side Are You On Rev. Maupin?