Let me start by saying this, COLLEGE FOOTBALL IS BACK IN TEMPE! The Arizona State Sun Devils officially returned to the field for the 2019 season against Kent State, earning a not-so-easy 30-7 victory in its first bout on August 29.

The first half was no cakewalk. The offensive line had trouble protecting true freshman quarterback, Jayden Daniels, whom was sacked three times, five overall. It was the Sun Devil defense that was the saving grace, holding the Golden Flashes to a total of 81-yards (82 rushing yards, -1 passing yards) and forcing three fumbles and one recovery, finishing the game with a total of five forced fumbles and two recoveries. Daniels was able to connect with Eno Benjamin for an eight-yard touchdown pass with 3:57 left in the first quarter — his first as a Sun Devil. Arizona State entered halftime with a 10-0 lead.

The third quarter is where the Sun Devils really separated themselves. We saw the opening drive end with a one-yard rushing touchdown from Daniels, putting Sun Devils up 17-0 after the extra point from Christian Zendejas. The highlight of the night came from senior wide receiver, Brandon Aiyuk. He put the wheels on and broke loose for 77-yard touchdown off a screen pass from Daniels at the 3:53 mark, capping off a 17-point third quarter. Kent State’s only points of the night came on a 21-yard touchdown catch from Isaiah McKoy, and subsequent extra point early in the fourth quarter.

The Sun Devils were short handed with a plethora of key injuries, and saw 14 true freshman and 11 redshirt freshmen take the field. When asked to acknowledge player availability, specifically the availability of true freshmen and redshirt players, Head Coach Herm Edwards simply said, “That’s what we got, and that’s who’s playing.” It should also be noted that Coach Edwards had “a little pep talk with some of the offensive players” when asked about the halftime adjustments.

In my opinion, Arizona State was sluggish in the first half and solid in the second. If it weren’t for the defense and special teams play in the first half, the game would have looked completely different. Maybe the 102-degree weather had something to do with it. It was the first game, with an abnormal amount of true freshmen and redshirt freshmen that saw action. Freshmen mistakes are going to happen. However, the offensive line needs to tighten up on its protection. The crowd was light, with the exception of the student section. In the words of a friend of mine, “Inferno deep AF!” You all can decipher what ‘AF’ means as you please.

The Sun Devils’ next home game is on Friday, September 6 against Sacramento State at 7:00 pm. 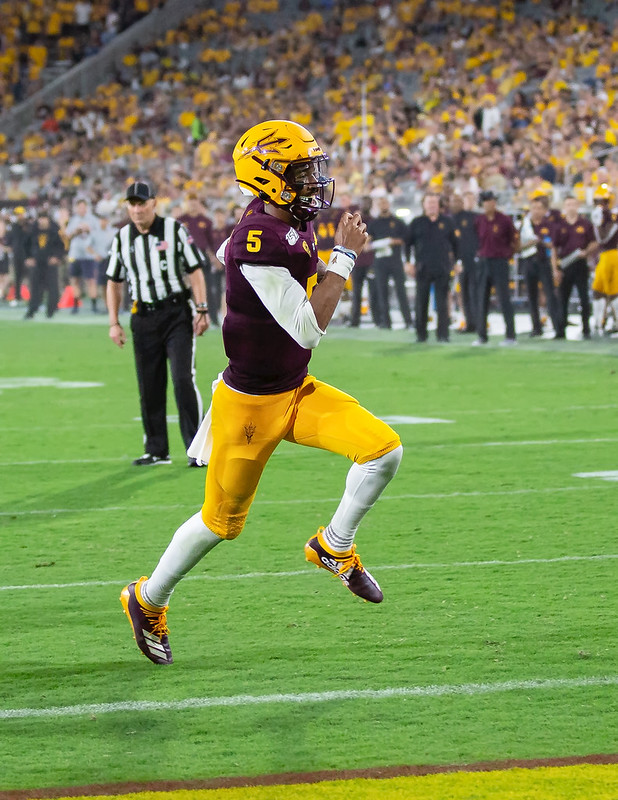