Coming off an impressive defensive victory against then-18th ranked Michigan State, the 24th ranked Sun Devils opened Pac-12 play Saturday, in Tempe against the Colorado Buffaloes. In an offensive battle, the Sun Devils struggled mightily on the defensive end, as it falls 34-31, Colorado’s first ever win in Tempe.

Arizona State entered the game with significant momentum and a perfect 3-0 record, boasting the nation’s second best-scoring defense. The defense that allowed 21-points through the first three games looked all but, as it could not get to Colorado’s Steven Montez, with the Sun Devils recording zero sacks and allowed 475 total yards.

The Buffaloes scored with ease on its first two drives and took a 14-0 lead in the first quarter, including missed 48-yard field goal attempt by Sun Devil kicker Christian Zendejas.

True freshman Jayden Daniels connected with Brandon Aiyuk on a 53-yard zipper for the Sun Devils’ first scratch of the game at the 13:09 mark at the beginning of the second quarter. Following the touchdown, Arizona State forced and recovered a fumble at Colorado’s own 44 and was able to take advantage of the turnover with a 1-yard rushing touchdown from Eno Benjamin — tying the game on the ensuing extra point. The fumble was the Sun Devils’ lone defensive highlight. Third down appeared to be the struggle in the first half, allowing the Buffaloes to convert seven of nine third down conversions, 10-17 overall. Arizona State entered halftime trailing 24-21.

The Sun Devils and Buffaloes each did not attempt a punt until the third quarter.

ASU head coach Herm Edwards said, “It wasn’t surprising,” when asked about not forcing a punt until the second half. At the beginning of the fourth quarter, Arizona State tied the game with an impressive touchdown reception by Frank Darby from Jayden Daniels for 39-yards, answering the previous impressive haul in from Colorado’s Tony Brown. Colorado connected on the go-ahead field goal attempt with 2:03 remaining in the game. Arizona State turned the ball over on downs on the following possession. A ‘roughing the holder’ penalty on the field goal attempt by the Buffaloes ended any chance for the Sun Devils’ quest for a game-winning drive. Not the way you want to open league play.

When asked what he tells the team after this kind of loss, with the defensive play described as uncharacteristic, Coach Edwards interjected, “I hope so, I hope it’s not in character,” he told the team “you ate some humble pie” and to “stay humble and hungry.”

Next, the Sun Devils look to rebound as it hits the road to for a Friday night, Pac-12 match-up against the 15th ranked Cal Golden Bears. Kick off is scheduled for 7:30 PM. 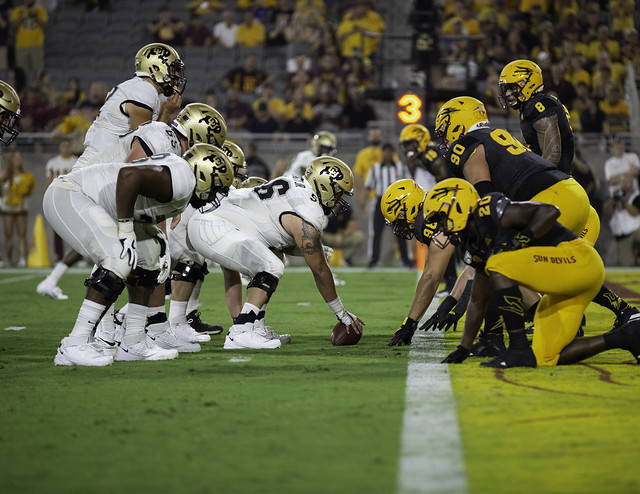 Jackie Robinson Day at Chase Field in Phoenix on April 15