Jayden Daniels rushed, took off, and literally propelled the Sun Devils to victory with a breathtaking helicopter touchdown with 34 seconds remaining to complete the comeback against Pac-12 foe, Washington State Cougars, in a thriller.

Coming into Saturday, the 18th-ranked Sun Devils were going to have their work cut out against the Cougars’ high-powered offense that ranks sixth in the nation overall. The first quarter was forgettable as the Sun Devils struggled early on both sides of the ball. Washington State was able to score a touchdown with ease on its first drive in under 2½ minutes, picking the defense apart. Arizona State was only able to generate 23 yards of total offense and True Freshman, Jayden Daniels, was sacked three times. Arizona State trailed 10-0 after the first, and I sure thought it was about to be one of those games.

The Sun Devils came to life in the second quarter behind Daniels and Brandon Aiyuk. The QB-WR duo connected for a 40-yard touchdown on the first drive, then a short slant completion saw Aiyuk break a tackle to take it to the house for 86 yards. Arizona State and Washington State entered halftime all knotted up at 17 after Christian Zendejas’ 31-yard FG to end the half.

The second half was tit-for-tat. At the beginning of the third quarter, running back, Eno Benjamin converted a fourth-and-one into a 32-yard rushing touchdown to put the Sun Devils up 24-17. Washington State followed up with back-to-back touchdown drives, 91 and 92-yard drives, respectively, as Washington State headed into the fourth quarter up 31-24. Daniels connected with Aiyuk for his third touchdown to tie it at 31 after the extra point.

Here is where it got interesting. Arizona State was forced into a bad punt into its own territory for Washington State to take over with 5:27 remaining in the game. Luckily the Sun Devil defense was able to hold the Cougars to a field goal, which was crucial. The Sun Devils took over at their own 25-yard line with 2½ minutes remaining in the game, down 34-31. Daniels connected with Benjamin for four consecutive passes for a total of 30 yards, including a five-yard run, then connected with Aiyuk twice for a total of 23 yards at the Washington 17 with 41 seconds remaining in the game. After the timeout, the True Freshman put on his hero cape and rushed for 17 yards and flipped in the helicopter touchdown with 34 seconds remaining, capping off the brilliant game winning drive, his third of the season.

Both defenses struggled over the course of the game. Washington State showed early why it is the sixth-ranked offense in the country, shredding the Sun Devil defense with very little pressure, and blown coverages. Once the Sun Devils came alive after the first quarter, they countered whatever Cougars threw at them, essentially beating the Cougars at their own game. Arizona State finished the game with 532 yards of total offense to Washington State’s 498. The run game was huge as the Sun Devils ran for 169 yards, while holding the Cougars to 32 yards on the ground.

Daniels has shown throughout the season that he does not panic in these situations. You cannot say enough about the poise he showed in this game, let alone the season. That brilliant final drive was easily a testament that the True Freshman has ‘it.’

Coach Herm Edwards stated of Daniels, “I know he knows when the moment appears, it’s never too big for him.”

Aiyuk had himself a game posting 196 yards and three touchdowns. Eno Benjamin also rushed for 137 yards and a touchdown.

When asked what it means to watch the offense, specifically Aiyuk and Benjamin, do what they do best, defensive back, Darien Butler stated, “They do this stuff to us in practice, we’re not surprised at all.”

When asked about the thought of winning an easy game versus a close game. Coach Edwards joked, “No, we don’t, they were trying to send me to the hospital.”

I guess Washington State Head Coach Mike Leach still could not figure out what mythical powers a Sun Devil has.

Next up, the Sun Devils hit the road for another huge Pac-12 match up against 13th ranked Utah Utes. Kick off is set for Saturday afternoon at 3 PM.

Brandon Aiyuk’s 86-yard touchdown was his career high, a career-high completion for Jayden Daniels, as well as the longest play of the season for the Sun Devils. 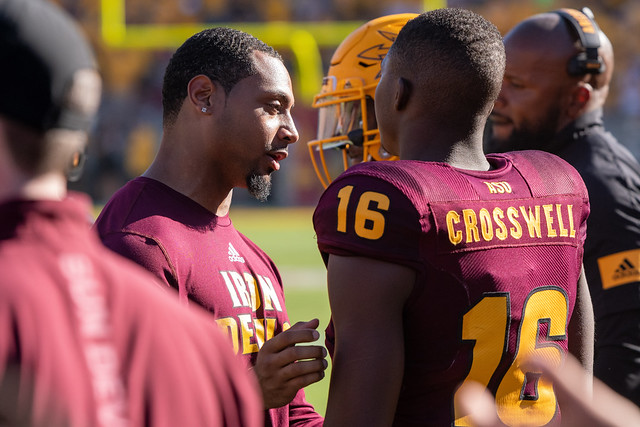